Do You Have What It Takes? WIFV Does!

Do You Have What It Takes? WIFV Does!

For over 40 years, WIFV have demonstrated the ability, brilliance, creativity, determination, effort, foresight, and global awareness to inspire local shooters, directors, producers, and everyone else devoted to making films in our region and beyond.

That’s why DC-Camera has long had a deep appreciation for the many contributions and dedicated leadership of Women In Film and Video-DC.  It’s a belief inspired by Erich’s mom, Ruth, whose immersion in the Roland family legacy of DC filmmaking innovation led to her certainty about the organization’s importance from its inception.  Accordingly, she and Roland House were recognized for both their leadership and contributions to WIFV. 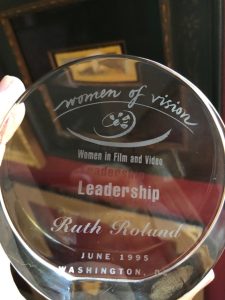 To honor that conviction, starting three years ago we began meeting with WIFV’s Executive Director, Melissa Houghton, to figure out how we could put some muscle behind our sentiment.

First, we decided to establish a Gear Grant program, with Melissa’s encouragement, to help a media professional working either with a local, non-profit client or on a local social issue, so we launched the first DC-Camera/WIFV Gear Grant in March of 2019. Ultimately, we elected to support all three of the inaugural applicants.

So far, two of these filmmakers, Carletta Hurt and Via Bia, have completed their films. Carletta’s film CLOTHED MINDS premiered on June 24, and Via’s post-production just wrapped up this month, so we are looking forward to news of its release shortly.

With the pandemic, most productions went on hold for 2020, but we have not let that deter us this year. Variants and other challenges slowed us down, but we are delighted to say that this month we are announcing that we will be supporting two additional creatives making films that touch on significant current issues, one addressing immigration and the other focused on climate change.

As we learn more and get to know these filmmakers, we will look forward to sharing more about their projects and the ideas that inspired them. For now, we just want to say congratulations to Gabrielle Ewing and Chrisa Giorgi; we are grateful to be working with you as you pursue these timely topics.

Finally, in order to continue supporting our industry’s return to semi-normal production, DC-Camera has instituted a special ongoing benefit for all members of WIFV.

To find out what it is, you’ll have to join their ranks and go to the members-only webpage (and yes, men can be members of WIFV too). When you do, you will quickly understand why we say WIFV has what it takes.

WIFV’s leadership, programming, and consistent support for local crafters in the film and video arts is unparalleled, and DC-Camera is honored to support their work.